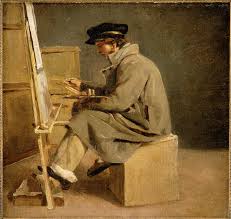 I had loved art as a child. Swirling my paintbrush in red and white, watching the bristles turn to pink delighted me. There were pallets of carefully measured primary colors, rationed to avoid the excesses children adore, margarine containers of muddied water, too clouded to rinse the color from the old brushes, two-foot-high easels with pieces of masking tape in the corner imprinted with each child’s name, and denim smocks riddled with dried paint. The morning I stood before my easel with my pallet in hand feels like yesterday. Autumn leaves of red, orange, and yellow sprinkled my construction paper, spinning in gales of a silent wind. I had an active imagination and could hear the leaves chattering in the breeze. I believed the leaves, like the birds, sensed winter approaching. I would paint my picture and preserve the leaves until spring.

I did not hear Mrs. Johnson hesitate behind me until I felt her fingernails grazed my neck as she snatched my hair and pulled my head back. Her voice shook with rage as she hissed in my ear, “You are painting the wrong way! You will ruin the brush!’

My voice stammered as I tried to explain why some of the leaves needed stems. Mrs. Johnson responded by seizing more strands of my short hair. My eyes swelled with hot tears. I knew if Mrs. Johnson saw my disobedience, she would pull harder. She growled in my ear once more, “Anna! You are painting wrong! You are not supposed to hold your brush that way! Stop painting upwards,” before wrenching the brush from my quaking fingers, reinserting it between my thumb and forefinger, and squeezing my little hand until my fingertips throbbed.

Head down. I watched my tears evaporate into the paint fragments of my smock and could feel the stares of my classmates on my back. That day, art became a mystery, secrets others knew but refused to share with me. When once I had seen the music of colors, shapes, and brushstrokes, I saw only an ugly, wretched piece of yellowed construction paper. In those few brief, devastating moments, art lost its innocence. The belief that I should never try to paint or draw or write stories again without risking the wrath of others is rooted firmly in my consciousness.

Over the years, half-heartedly, I raged against the memory of childhood betrayal by landing parts in school plays and memorizing literary pieces for oral interpretation contests in high school, but mostly I capitulated. For a study-away semester in college, I had desperately wanted to go to Florence to study Michelangelo and Botticelli, lose myself in the maze of Renaissance architecture, and sip red wine as the sun cast a burnt orange glow over the cobblestone streets.

Instead, I went to Chicago to study urban politics. Partly due to the money I knew my mother did not have but mostly a result of not having the temerity to resist my childhood wound, the prospect of traveling to Italy disintegrated.

Art continued to be both a mystery and curiosity. Occasionally flirting with a class or entering a museum, I stared at paintings and sculptures from a place of ignorance and shame. Art history stymied me with its complexity and breadth of history. I lacked the language to interpret what I saw and felt in contemporary or modern galleries.

Art intimidated me. That is until I discovered William Blake. With anger and passion, outrageous Biblical storylines, the radical artist pulled me into his web of madness. In graduate school, the passions for art and mystery, myth, and story returned and took hold of my heart. As part of the semester, I studied Blake with reverence and astonishment, I wrote a series of fictitious letters to my rebel hero, and with the guidance of a kindred spirit, I found my voice on the page.

The following is one of the last letters in the series I wrote when our relationship had bridged the gap of time, and I learned my resistance to the hunger of the soul was futile.

Last night, my fingers entwined in yours, you led me to the edge of an endless pool of red-hot fire. Molten rocks exploding, surging rivers glowing with their own consumption. In awe, I watched you reach into the fires of imagination. Spoonfuls of flames cupped between your fingers bloomed like lotus flowers with petals of sapphire, emerald, and gold. Terrified your hands would burn, I wept into your palms until the flames vanished. I held your hands to my cheek to soothe the blisters, my eyes would surely see, but when I turned your palms over in my own, your hands had healed.

Again, you reached into the fire to gather a bouquet of imagination’s fury alighting tree limbs and stones, books of poetry, and lost photographs. Beneath heaven’s starry blanket, I leaped to extinguish the flames with my breath. I stamped my feet mercilessly until my bare soles bled. I searched in vain for waters to control the unruly blaze. I begged you to harness the fires, fearful of their roaring heights. Your eyes twinkled with a hint of madness. Your gaze pierced through my own skin, boring a bloodless hole into my trembling heart. I wept again, begging you to discipline the frenzy until I sank to my knees, convinced my own horrible, fiery death was at hand.

It was then you knelt beside me, your hands on my face, wiping the tears of dread from my eyes. In a voice as gentle as a man in love, you said to me, “Why do you resist that which you know you cannot,” holding my eyes to yours until I surrendered to the flames of my own imagination and desire.

When eyes of war meet
Scroll to top