For Ukrainians, both in Ukraine and worldwide, death is not viewed simply as the cold, lonely end to a life. Indeed, life itself is composed of three parts: the living, those ‘departed,’ and those not yet born. The Ukrainian poet Taras Shevchenko dedicated one of his works, “To the dead, the living, and the unborn countrymen of mine, living in and outside of Ukraine, my friendly epistle” (1845).

The Christmas Eve table includes a place setting for the souls of the ancestors. To remove any food on the plate before Christmas morning is considered a sin. When family members sit down to eat the non-dairy, twelve-course meal, each pauses to blow upon and brush their chair if a visiting soul is occupying it.

In the winter of my sophomore year in college, I experienced first Ukrainian Christmas Eve with my father’s friends, Bohdan and Nusia Rozdilsky, and their family in Saskatoon. 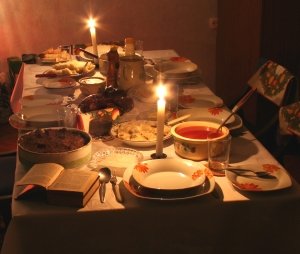 Rich geometric patterns of orange, ruby, black, and gold sewed into Ukrainian linen peak through platters of jellied fish, fruit and potato varenyky, and blood-red borscht. In the center of the table, the kolach bread, braided in three strands – the Father, the Son, and the Holy Spirit – is swathed in candlelight. One place setting, its knives, and forks, plates, and glasses laid with care, remains empty to remember those souls that have gone before.

The child at the table desperately searches the corner of the room for the hidden sheaf of wheat she has learned hidden each Christmas Eve to bring health, abundance, and good luck to those seated at the table in the coming year. The child loves the movement of light casting shadows in and out of the crystal wine glasses and silver candlesticks. Some think the child’s eyes are green, and others gray, steal a glance at the candle in the window. The steady flame burned all evening to remind the family of Ukrainian soldiers who fought in wars past.

In the near silence, the head of the family recites holy prayers in Ukrainian. The man’s strapping, translucent voice collapses into the incandescent play of the candlelight and consoles the remotest part of this child’s heart, nearly rocking the child into a peaceful sleep.

Long ago, there was another child, one who also loved the twinkling lights of the sacrosanct night. Before this child was a man of thirty, he would learn to fear light in the darkness. He would not remember light as salvation like his daughter but as a remorseless terror when the sweeping columns of search beacons moved across his frozen body in the camps, his heartbeat as if it might explode. The moon that his daughter loves so much frightened him years after he was no longer a prisoner, its rays disrupting his fragile sleep even when his wife’s cool hands reached out to comfort him in the night.

I was the child at this sacred table, enchanted by the light, the sounds, and the tastes of my first Ukrainian Christmas Eve.

The funeral was held in an ornate Ukrainian church. Behind the altar, a gold screen embedded with saints’ visages glowed in the dim light as the dense smell of incense dissipated. The priest, chanting prayers in Ukrainian, walked around the open casket wreathed in candles, the heat warming the cold face of the man I once called uncle. 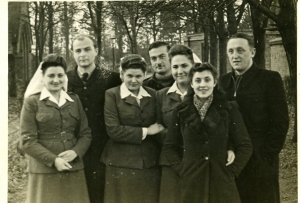 Later, by the gravesite, a group of men, graying and fragile, moved towards the closed casket. On their breasts, rows of gold and bronze medals chimed, the ribbons, blue, red, and green, bright against the anemic Canadian winter sky. These men were survivors of the war, members of the Ukrainian National Army, like my father and Bohdan. Their voices, reedy at first, deepening with each octave, told a story about how a man, knowing that he can never be buried in the Ukrainian steppe, prays that his soul will return home one day.

Like the man in the Ukrainian lament, my father never returned to his homeland, nor did he live to see the Berlin Wall crumble, and the Soviet Union disintegrate into fragile republics. This is the tragedy of history: when history we should have witnessed happens without us, both the dead and the living are so far away from it. Maybe Bohdan found my father in the mists of time, and they are wandering the streets of Kyiv with chants of the Orange and Maidan Revolutions on their lips.

The song called, Look There, Brother Mine is actually a poem set to music and is traditionally sung at the end of Ukrainian exiles’ funerals to symbolize sorrow for the homeland.

Look there, brother mine,

Look dear friend of mine,

The cranes are winging south, migrating.

In a long grey line.

Dazzling to the eyes,

Endless in the skies,

Maybe their deaths will only be a long sleep.