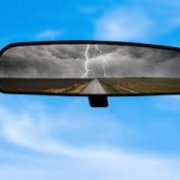 On autumn days, when I drive across the prairie alone, my father’s country, Ukraine, appears in my rearview mirror. The country’s outline does not emerge near the anniversary of my father’s death. He died on the last day of June. The silhouette is disconnected from his birth under an Aquarius sun during the darkest part of winter, too. Rather, the faint, porous Ukrainian borders materialize long after the sun begins to wither when the blue sky is so crisp that my teeth ache. Only when the corn stalks have disappeared under the plow, and the air is motionless do I detect this foreign vista behind me.

I have come to expect this annual visitation.

The film stills of Ukraine rolling behind me are not part of this century. I do not see the effects of Chernobyl on the polluted land or drink the poisoned water. I cannot picture the pinched faces of young girls with little to believe in but familiar strains of pop music and their boyfriends’ hands between their thighs. The empty grocery store shelves and the derelict buildings of a once-grand and fortuitous country do not cross my view.

I see my father’s Ukraine, instead.

In the mirror, I see a land where men once guided themselves across quiet, wheat oceans by starlight like mariners. Bison and antelope, wild horses, and prairie hawks still innocently roam across this bruised land. My ancestors’ bones are buried in this black earth too, buried deep within a prairie my father once walked across with faith before the war came.

The sharp smell of wood smoke filtering through my cracked car window reassigns me to a distant century. I see Baroque churches with Greek domes and mosaic Virgins pieced together from crimson, turquoise, and emerald fragments. Ox-drawn carts stumble across muddy roads leading into dark forests. I see braided kolach bread wreathed in candles on Christmas Eve and brightly colored Easter eggs in April. I see my father on the back of a horse, his boots dug deep in the stirrups, or is it I dressed in the pale green sweater and t-shirt, my cold hands gripping worn leather reins, my cheeks pink like a pair of apples, who I see?

Behind me, there are wandering minstrels carrying banduras. I see a poet, who was once a serf, argue angrily with Fate as the train carries him into a frozen exile, pencil, and paper ripped from his hands. I sit at a wooden table next to an uncle with the taste of resistance and borscht on his chapped lips in my horizontal moving picture. My father is at the table too, arguing with his brother – the dissident – arguing tearfully against the path of hunger and violence Fate will lay down for both of them. I see great famine and peasants scorching their own houses, burning the last sheaths of grain before the day’s arrests begin. These truths, like his cold, sepia-toned landscape, darken the history of my father’s Ukraine.

I have never traveled to my father’s country.

I have not seen how the beech trees cling together in dense forests or how the linden, oak, and pine branches knot in a web above the swamps and meadows. On the streets of Kyiv, my Eastern European features have not dissolved into faces with an architecture that has not changed for centuries, ones that belong to lives steeped in cheap Vodka, blunt cigarettes, and unrelenting poverty. Sitting on the docks in Odessa sipping Turkish coffee and smoking in the chilly morning air has not been part of my life. Nor have I stood with my father by the Black Sea mesmerized by the oceangoing freighters crushed together like downtown office buildings.

Would I even feel a connection to Ukraine if I knew where my father stood in the photograph I have of him, amidst bare trees, smiling? Would I understand what he saw as we stood together on the first land he owned after the war when all I wanted was for the mosquitoes to quit feasting on my plump ten-year-old body? It made no difference to my father that the land was part of the Canadian prairie. This land was saturated with his memory and the typography of the Ukrainian steppe. Land loved. Land labored. Land lost. The spiritual and historical life of an entire nation revolves around Ukrainians’ intimate relationship with the earth.

For my father, Ukraine was a land driven by memory; for me, it is driven by history.

I am half Ukrainian because my father was Ukrainian, because of the spelling of my last name, yet, I do not know what this means, what it meant to him. His blood, the same blood flowing in my veins, gallops through the arteries of men and women who still live on this fractured landscape. The false borders of politics may have crumbled, but history continues to keep me apart from my Ukrainian family born after the war, the family I will never meet. Ocean. Land. Politics. Much more than geography and the deep separate us from each other now.

War. History. Language. Revolution. Disintegration. More revolution. How would I find my family? Would I only exact unhappiness and confusion on the survivors, walking up the path like the prodigal daughter returning, the unwelcome ghost of my father and my uncle, murdered by the Nazis long ago, carved into my cheekbones? Stones unturned, souls at rest, perhaps.

Was I wrong to believe that my father’s silence about Ukraine, a silence he kept like an ancient tradition, was a punishment I deserved? Maybe I did not understand that he stayed quiet because he knew his words would never be enough to describe his torment over losing his family, his country, his heart to war. I did not consider that words would always be lacking; his sentences withering like autumn leaves. Perhaps history inevitably starts to fade on the page when a book gathers dust, unread. Maybe I believed in his silence more than I believed in his death.

Still, there is something intrinsically familiar about this country that stubbornly appears to me each autumn. I, too, am driven to argue against the circle of Fate that others try to lay down for me. I hang on to the things I cannot hold in my red, red heart and live as my father did, always in motion. This restlessness is not simply the legacy my father bequeathed to me. The urge to roam was implanted in Ukrainian blood rushing through their veins centuries ago.

The lost instruments of a lost Ukraine

This is my inheritance: Ukrainians’ souls have been sad for centuries, and now this loneliness is mine to manage—this hunger.

When I go to Ukraine, I will see an independent country and listen to the echoes of revolution in the streets. I will go to bear witness to the sights and sounds, smells, and touch of my father’s landscape and feed the uneducated part of my soul. I will go for my father because he could never return home without risking imprisonment or death. I will go to Ukraine one day because the act of remembering is a holy one. The path from the villages of Ukraine to the American prairie is threadbare. The faint trail follows the line of the northernmost railroads, snaking their way across the edges of North Dakota and the southern border of Canada. My father did not follow this trail weaving a well-worn path of history to Canada, one that Ukrainians coming before him had beaten down with muddy boots and hopeful souls. Instead, he set his life down on another prairie with no history of others like him coming before. A well-educated man and a man of many languages, he could have set his life down in any country, in any landscape, but instead, he found his way back to the topography he once knew.

In death, Ukrainian ancestors reside in the fields, in the orchards, in the forests, and their homeland’s skies. Yet, like thousands of Ukrainians who pulled the roots of their lives from one unforgiving landscape before setting their lives down in another halfway around the world, my father discovered his memory of the prairie after the war. And now, in a part of the world where my father found peace, each autumn, his country that pursues me like a panther telling me it is time to come.