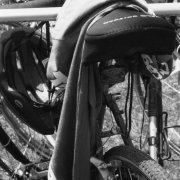 The pain in my left knee is so unbearable that my joint buckles when I try to walk. For the past six days, I have watched hundreds of other riders succumb to injuries, weary muscles, and the blistering heat, but now, after nearly a week on a bike ride to raise money for local HIV/AIDS hospices, I cannot stand on my leg without wincing. I lie down on the immaculate lawn of an anonymous suburban Chicago home and reach into my backpack for the Advil, washing four capsules down with warm, lime Gatorade.

Mobile medical crews hover like grounded helicopters waiting to pounce. If I am too far from the finish line in central Chicago, one of these crews will radio ahead, and my bike and I will be loaded on one of the flatbed trailers rolling past me. 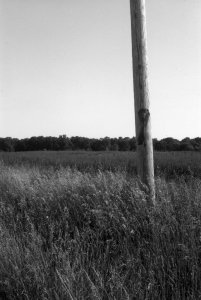 Each passing flatbed truck renews my resolve to bike every remaining mile. Yet, I know that more than my knee is collapsing in suburban Illinois. In a maze of twisting roads and cornfields, I have painfully acknowledged that the career I have built in politics is one I no longer wanted. Drawn to anyone stained with a history of suffering like my parents, I wondered if my work had been nothing more than a feeble attempt to assuage my own anguish over the residual effects of my family’s narrative.

The commitment that had once been genuine crumbled with each passing mile, and by the time I had reached the eastern Wisconsin border, I doubted my integrity completely.

I might have chosen a different path. On the eve of my graduation from college, my British journalism professor, a quiet mentor who would later die tragically from lung cancer at the age of 62 a few years after I graduated from college, tried to persuade me to get a job writing instead of as a union organizer.

During the last week of class of my senior year, on an afternoon that portended long, lazy summer days ahead, he and I walked across the lush, green college campus lawn towards the parking lot of the college’s fine arts building after having coffee together.

“So, you are going off to Mississippi then to Montana, is it, to work for a union? Are you sure that you have made the right decision? There are many ways to make a difference in this world, Anna, besides being a professional activist. Many heartaches go unrecorded, and political policies remain unchanged because no one understands how the decisions made affect people. In this country. In Africa and Europe. In South America. On every continent,” he mused in his clipped British accent, leaning against his car.

“Yes, that’s why I am so excited to be making some real change in this country, especially since I am going to spend the summer in rural Mississippi working for a civil rights group before going to Montana,” I said with a vaguely false conviction.

“Life has not changed in the South, Anna; in fact, life is almost the same as it was in the 60s. People are poor and disenfranchised, neglected by those who have the power to make a difference, but Anna, we also need witnesses to history, not just people to try and often fail to make a change. If no one is there to witness how the human condition unfolds, problems go unrecorded and, worse yet, unresolved. You are such a good writer, Anna. I am afraid that you will be worn out chasing cause after cause when you are thirty. Writing allows you to step back, reflect, debate, consider. It would help if you wrote,” he said emphatically. “Think about it.” Squinting at me in the brilliant afternoon, he moved to open his car door. 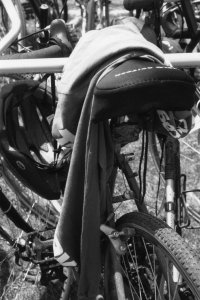 I never saw my professor again.

I did not want to be a witness. A witness was all I had been in my life, I thought angrily. A witness to my father’s anger and loss witnessed my mother’s loneliness living in a country that was not her own. Let someone else be the bloody witness. Besides, politics is what I did. Politics is what I knew. Wasn’t it?

Indeed, weeks before the ride, ten years after my college graduation, I had solicited dozens of opinions from others about graduate school options. People in my orbit pointedly steered me towards law schools or MBA and public policy master’s programs. Yet, my journalism professor’s advice nagged at me.

The last dose of advice I swallowed came during breakfast with a professional colleague. Between bites of pancakes, my friend was resolute in her opinion. “All your experience in politics will go to waste if you don’t focus your academic interests in the same direction. People look to you as a leader, and a graduate degree in your field will only solidify your position.”

“I don’t know. It doesn’t feel right to me. I want to write….” I had answered, my unsteady words quelled by the clatter of dishes and requests for coffee. Something, or rather, someone’s opinion, had nagged me for months.

Though I had ignored my journalism professor’s sage advice to write, I wondered whether he had been right with each turn of the pedals. Somewhere along the line, I had abandoned what my heart had always wanted – to write – and what it had always needed to understand – my history. Surely the prospect of going to school to study creative writing was not a Herculean effort?

My journalism professor had envisaged my eventual disintegration. His declaration, like my family’s history, had certainly pursued me like a panther tracking its prey across every state border I crossed. An hour passed before I guardedly begin to stretch my knee.

I swallow more Advil. With trepidation, I climb on my bike, forcing myself to concentrate on the brilliant blue sky and the acres of horse farms sprawling in front of me. I count telegraph poles marked with the ride’s crimson ribbons for miles. Once I reach the Chicago city limits, the pain in my knee has evaporated, and my decision was made.