Under the shadow of the domed Greenwich telescopes, I lean over a thin, black line bordered with twinkling red lights, the geographical collision I have longed to see for years. When I was a child, I ardently scoured my grandmother’s Suffolk garden for evidence, convinced that the slender furrow snaking through the carrots and runner beans was actually the Prime Meridian Line in dusty disguise.

I am still on the hunt to understand the line that has divided me from birth.

In front of me, a little sign points in opposite directions towards the eastern and western hemispheres. I glance around quickly to make sure no one is looking before I begin to play childish games with myself hopping back and forth over the embedded black ribbon. One minute I am standing with both feet planted in the western hemisphere. I scamper over to the other side, dipping my toes back over its edge like I am Goldilocks trying to find a porridge that is neither too hot nor too cold. Eastern hemisphere. I was born on this side of the line. I stand quietly for a few minutes, looking at the side of the world. I cross the line. Western hemisphere. This is the side of the world in which I have lived most of my life. The story behind this geographical split in my life may not be evident to many others, but as the Prime Meridian Line, the line’s divide, like my own, has always been irrefutable to me. 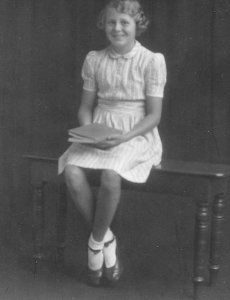 In a photograph taken of my mother at age thirteen, she does not see a hint of the divide to come. Around this time, the photograph was taken, my mother and her classmates from the East Anglican girls’ school in Bury St. Edmunds climbed on a bus twice a week to travel to another school for swimming lessons. The bus rambled past a processing camp. The men behind barbed wire were not English but Ukrainian prisoners-of-war waiting to be granted legal status as newly arrived immigrants by British government authorities. With naïve and youthful enthusiasm, my mother and her classmates waved madly to the anonymous men hovering near the fences of the Surrendered Enemy Personnel Camp 231, Redgrave Park.

The year before my father died, when I was thirteen years, my parents and I visited the camp remains. The buildings looked like giant mushrooms. Their arching, corrugated iron roofs stretched across broken concrete floors marooned in acres of wild grass and farmland. The remnants of these shelters were the only buildings protruding through the landscape. The only artifacts left. All the medical tents, sleeping quarters, and wire fencing had been torn down decades ago.

My father had wanted me to see Redgrave so that I would understand a part of him, but instead, he stayed silent, and I was still the spectator. I remember gazing at the colony of prefabricated Nissan huts that remained, trying to imagine my father living in this camp, looking over his shoulder to see if soldiers followed him to the farm so he could steal a farmer’s cabbages to make soup. I could not picture my father’s face, gaunt from hunger, or the barricades circling the tents. I was looking at a photograph in the history book of a stranger.

That day, I watched my father’s mind travel across decades, seeing each family member he lost, recreating the barracks and the barbed wire. He was both out of place and at home. He stood with arms crossed, rocking back and forth on his heels, nodding as if reconciling the English countryside with his memory. The water tower withered beneath choking ivy vines. Moonbeams had replaced the searchlights long since extinguished on the lake’s surface. Only a silent orbit of a wild swan disturbed the horizon of liquid glass.

Abruptly, my father turned and looked right through me to the other side of his history.

I was born to one of the men living behind barbed wire and the woman who sailed past him in a battered school bus. Indeed, their marriage assured me that my life would always be tethered to another part of the world. I am not responsible for the history that continues to unravel on both sides of this invisible line; yet, this legacy the fates have dealt me is mine. I have not always known these truths. Decades isolate the adult woman I am now from the teenage girl when I crossed over this line. Told by my parents for as long as I can remember that I was English, I believed this to be true. Yet, our family joked that my true lineage not unlike Heinz 57 steak sauce: a tablespoon of English and Ukrainian, several teaspoons of Polish and Scottish, a pinch of Irish, and a third of a cup of American by experience.

The Heinz 57 metaphor became my truth. Perhaps I have always been Anna, from America.

Part of me believes that today I must choose one side of the line over the other. If I had to decide at this exact moment, if I could not reverse my choice once made, on which side would I claim as my own, on which side of the ocean would I call home? I place one foot in the western hemisphere and leave the other one on the eastern side. I straddle over the line, a position with which I am most familiar.

Partitioned like the human equivalent of 0 degrees Longitude and 0 degrees Latitude, I came of age looking not forwards but backward.

My mother crossed this line for love. She stayed on the western side of the line for the same reason after my father died, believing that my future and, therefore, hers was in America. My grandmother expected us to return to England after the funeral and could not understand why her daughter would not come to return home. Yet, my mother’s friends said that she made the best decision for both of us. Years later, I am not so sure.

I stare at the line before moving to the eastern side. Do I imagine I have caught a glimpse of a place called home? Or am I simply trying to imagine the life I might have had if my family had not come to America but stayed in England? How would my past have unfolded differently if all the pages of my parents’ history and lives had stayed intact? 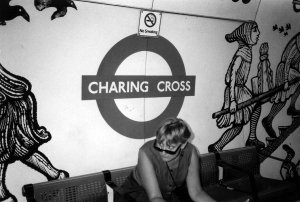 What does it mean to be ‘from’ somewhere anyway? Does this reference mean a dot on a map? A culture? A family lineage? Four walls in a particular house? A landscape of a continent? A time in history?

I am more committed to the four walls I live in rather than an actual geographic location. My grandmother’s house, the Veterans Administration’s apartment, my mother’s own haven in Sioux Falls. I write about the English four walls, the walls I write in, the house I imagine buying in England. Maybe the home left behind is more accurate in one’s imagination. Was it my intolerable grief over my father’s death that forced my mother to choose to stay in America?

Did I ever really choose one country over the other?

In the brilliant and sweltering late afternoon sun, so uncharacteristic of an English summer day, history wells up inside of me once more. I am still divided, still learning to live with the burden of my own survival, which I inherited, one that almost broke me. I remain lured by the magnetic pull between what might have been with what is still hungry for a place to call home.