On the three-day drive, I was imbued with the fantasy of making a mark on the terrors still rocking the south, just like the volunteers of Freedom Summer. Channeling Martin Luther King, Jr’s letter from a Birmingham jail, I was a true believer. Mile upon mile sped by me as I drove through the Midwest’s familiar cornfields until the fields turned to cotton. Sharecropper shacks with pieces of tin hanging askew and doors cast open to the southern heat scattered the roads. The button-shaped cotton hung delicately in the breeze. After two days of driving, I found myself perched on the rolling Mississippi Delta.

Entering Lexington, located in one of the United States’ most impoverished counties, I made my first mistake. I was lost. Slowing my car to a near stop, I asked a young African-American kid for directions to the house I would call home for a few months. He signaled that he was not only deaf and mute but really, he was afraid of my white face. I gave a weak wave and drove away, embarrassed and equally scared.

As the legendary civil rights leader Bob Moses, who led bright-eyed, northern white college students into the rancid belly of the south, said, “When you’re not in Mississippi, it’s not real, and when you’re there, the rest of the world isn’t real.”

Not much had changed since 1964, as I soon discovered.

I parked on the grass outside my assigned housing. No sidewalks. Broken screen doors flapping in the wind. Next door to the house, an aged black woman sat rocking in her chair and nodded once, but before I could respond, the door to my appointed house swung open, and Jay, one of my new roommates, stood on the porch grinning.

“You must be Anna,” he said in an accent that had pooled his Boston roots with his southern exposure into one fluid tone.

And so my summer in the American south began, a summer that many years later is a compilation of random, potent images. Playing games of spades with the neighborhood children and their uncles long into the damp and humid Mississippi nights. Drinking peach-flavored wine coolers with the Franciscan nuns who lived down the street. The week before I arrived, a shotgun blast had torn their front window into splinters, punishment for their work with the same civil rights organization that paid me. 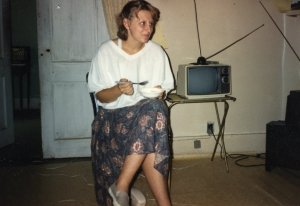 Friday and Saturday nights found me dancing and grinding to rap’s early sounds in roadside juke joints. Open to anyone bringing their bottles of liquor, the mixers provided.

I read Heinrich Böll that summer, the book a gift from Jay’s girlfriend, Sal, an English radical who had picketed with the mineworkers during Margaret Thatcher’s rise. Jay and Sal’s friends Doug and Deidre came from England later in the summer for a few weeks. Most nights, Doug drank himself to sleep, perhaps because the history that hadn’t faded was too much to see firsthand or maybe because his fierce and sharp political wit meant nothing in the segregated south.

A handful of black and white photos record catfish fries with the men and women I came to know and love, men who skinned the scales off the fish before tossing the carcasses into boiling vats of oil, and women who hid the extra Scotch bottle from their husbands and lovers. Catfish and scotch were the only items on the Mississippi menu. 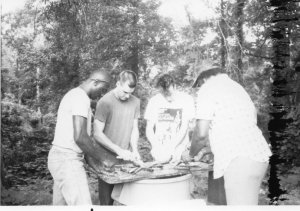 Mostly, vignettes of conversation and laughter appear and fade.

Sal standing firm before the town’s white election judges in the shadow of a New York Times reporter sent to cover the Federally mandated election, an outgrowth of a redistricting plan to counter decades of gerrymandering. The quiet voice of an eighty-year-old black woman insisting that she put her ballot in the box to vote as Sal and Jay, Doug and Deidre, and I stand ready to pounce if the woman is denied. Staged arguments between the neighbor kids and challenges over games of cards mixed with the gospel and R & B and George Michael, the only Caucasian artist the disc jockeys on the local radio station, WLTD, played.

And then there was a five-year-old little girl named Lee Lee. 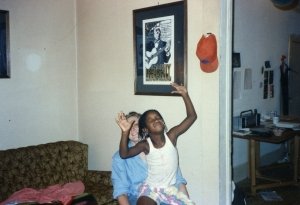 Sharp, like a tack, Lee Lee, the daughter of one of the organization’s community leaders, already had a jaundiced eye of the world. The arrival of outsiders in Lexington failed to impress her. Still, from the beginning, Lee Lee melted the hearts of everyone she encountered, strangers and family alike. With carefully woven braids that her mother, Norzella, pulled and twisted each morning, Lee Lee announced her arrival, her tiny frame with each hand glued to her hips. Lee Lee may have been bossy and engagingly irritable at times, but she was still a child stung by the tragedy of racism.

“Why do white folks hate black folks so much, Anna?” she asked me one day. “You don’t hate black folks. Jay and Sal and Doug and Deidre don’t hate us. Why do people like the man in the grocery store hate us?” Lee Lee’s usually bright eyes clouded over, and her infectious giggle fell silent.

“I don’t know, darling. I don’t know,” I said, scooping her up in my arms as I had done so many times before. Burying my face in her braids, I bit my lip too hard.

On the morning I left Lexington, the heavens opened. Rain rivers rushed along the roads, turning parched earth to mud. The cockerel that crowed at all hours of the day and night outside my bedroom window stayed still. Jay and I loaded my bags in my station wagon and were soaked from the moment we stepped off the porch. Reports of tornado-ripe conditions peppered WLTD’s airwaves. First gray, then black, then green, then black again, the sky rolled and curled. Scampering back in the house, I hugged Sal and Deidre with promises to write. Doug was asleep, still in the early morning haze of alcohol from the night before. One more stop to make before I headed north. 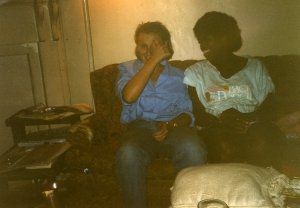 As I drove up to the house, Norzella stood on her porch, watching the torrential rain. Seeing my car, Lee Lee bounded out of the house shouting over the thunder and leaped into my wet arms.

“Anna. Why do you have to leave? You can stay. Anna. Stay,” she said as if she scolded an errant puppy.

“Lee Lee. You’re soaking wet. Let’s go stand on your porch and get out of this rain.”

I stepped onto the porch and met Norzella’s eye for a moment. Both of us knew that this goodbye would not go smoothly.

“Lee Lee, sweetheart, I have to go now.” I gently set her down on the porch, but as I go to hug Norzella, Lee Lee lunged towards my legs and wrapped her arms around my soaked jeans.

With each wail, her grip tightened. Soaked and sobbing, I bent down to hug the little girl who, while wise beyond her years, was inconsolable. I stroked her damp beaded braids. “Come on, darling. I don’t want to go, but I have to leave. You know that.”

Alternately crying and hiccupping, Lee Lee’s rage soared. “Then don’t,” she wailed. Always resourceful, Lee Lee grabbed onto my hands and pushed her tiny fingernails into my palms until spots of blood poked through my skin – my Mississippi stigmata.

In my rearview mirror, I kept my eyes on Lee Lee tightly wrapped up in her mother’s arms in the rain. A few miles outside of town, I saw an accident by the side of the road and pulled over. The mother and father stood in the rain, inspecting the damage on the fender. Their Sunday clothes were ruined. The man’s head was bleeding.

I shouted to him over the rain, asking him if I should drive back into town to find an ambulance. The mother turned away and climbed back in the car, where three sobbing, frightened children sat in the back seat.

“Follow me back into town to the hospital, sir. You are bleeding,” I shouted over the thunder to no avail.

Not wanting to be seen talking to a white woman, he backed away from me, climbed in the car, and floored the accelerator, tearing up the road. An offer of aid did not matter.

I left again, but this time I wept all the way to Nashville.

Pedaling away from the past
Scroll to top