I am eight years old. After my mother and I arrive at Heathrow Airport, an announcement boom through the loudspeakers over the baggage claim carousels instructing people to move towards the nearest exits as quickly as possible. There has been a bomb threat in the Departures Terminal, and swarms of people spill over into the Arrivals terminal. Maneuvering a cart of our luggage, my mother grips my hand tightly, so tightly, I cry out in a fog of jet lag, jostled and pushed by the controlled panic.

“Anna. Please do not argue, darling. We have to do what the Bobbies say. Just keep hold of my hand and don’t let go,” my mother says firmly, awkwardly steering the cart through a maze of travelers. 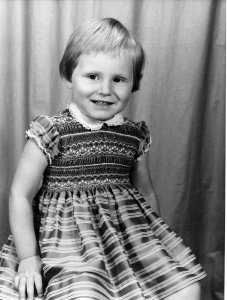 From behind the concrete pillars, police officers with enormous German Shepherds materialize and begin to scour the quickly disintegrating area into chaos. A woman dressed in a brightly colored sari, her ample belly peaking from beneath the fabric, talks animatedly to her husband, who struggles to steer their own luggage cart stacked high with cases. A frantic Japanese businessman in a crisp pinstriped suit brushes past me. Still, he is quickly intercepted by a police officer and turned in the opposite direction—an elderly couple dressed in dark, wool clothing trudge beside us with their nearly empty cart.

When the woman comes close, the smell of fried onions and sweat lingers a little too long, and I turn my head towards my mother’s suede-covered arm. The two strangers speak in broken English that sounds like my father when he phones his Ukrainian friends in Canada to talk about medicine, land, and beekeeping before his words collapse into a riddle of a language I cannot decipher. 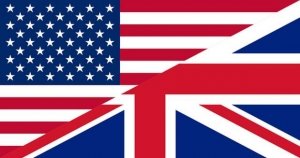 Near the Arrivals hall entrance, dozens of people hold placards with names written in thick black markers. These strangers hover, looking expectantly into the faces of travelers streaming towards the exits. An older man dressed in a tweed suit dabs his eyes intermittently with his handkerchief and waves a piece of cardboard with a girl’s name. “I am waiting for my granddaughter, but she has not come through Arrivals yet,” he tells the police officer in an agitated voice. “She is only eleven years old, her mother has died in a car crash, and I am her only family left. She is coming from America. I have to meet her,” the man whimpers.

I watch the police officer calmly turn the man around by his shoulders and tell him in a firm but the kind voice that he is sure that his granddaughter will be all right. I cannot look away from the consuming sadness on this man’s face and keep him in my sight until he, too, melts into a sea of people.

The voice echoing through the loudspeakers, more insistent and agitated than the first time, instructs us again to move as quickly as possible. The automatic doors fly open as our cart hits the plastic mat, and my mother and I are cast into a throng of people and the blinding sunlight. No one is meeting us at the airport.

Though a suspicious package will later be located in the Heathrow complex, an explosive is not found. However, seventeen days after our arrival, a bomb planted by members of the I.R.A. will cause extensive damage in the Houses of Parliament and injure eleven people. Another bomb blast with the I.R.A. imprint but not an admission of responsibility will kill one person and injure forty-one others at the Tower of London, days after my family’s visit to this historic site.

Once on the Tube into central London, I sink into plush plaid cushioned seats. Before we arrive in Bury St. Edmunds, my mother and I will ride two additional trains intersecting across southeast England. At Liverpool Street, my mother guides us deftly through the hordes of commuters and tourists to one of the trains parked at the end of the track. The white letters declare their destination on the front panel: Cambridge. A red-faced man, dressed head to toe in a navy blue uniform, his gold buttons glistening in the artificial light, heaves our bags onto the waiting train. I follow my mother, my hand still clasped in hers, down the narrow passageway as she glances in each compartment, hoping to find one vacant.

“Here’s an empty one, Anna. We’ll sit here.” With a sigh, I collapse into the hounds-tooth-covered seat opposite my mother. I am so tired. “You may have to move if another person comes in this compartment,” my mother says wearily, sliding the glass door shut, turning to stack our bags on the metal rack above us.

“I know,” I whine. “I want to sit here, o.k.? I like sitting backward. Sitting in the other direction makes me feel sick.” Besides, I want to see where I have come from. I mumble as the train trundles out of the station.

Years before England became two worlds, one steeped in history and tradition and one obsessed with all things contemporary, I walked through this layered history of familiar streets, historical streets that mapped the skeleton of my genetic code, my authentic self. This world was the world I was born into on an early April morning, a world where generations of women moved quietly around me like the earth revolving gently around the sun. Plane’s arc, a definition since childhood

When art was my mystery
Scroll to top