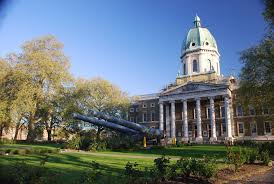 Deep inside the bowels of the Imperial War Museum, I stand with a group of tourists and British nationals waiting to enter a simulated bomb shelter. Once inside, the guide instructs the assembled group to sit along with the wooden seats along the far walls. Grade school children on summer holidays giggle and poke at each other before their parents issue admonishments. A sliver of light from the guide’s dimmed torch pans the room before the door closes, leaving a giddy hush and pitch-black darkness behind.

Before I came to England, my mother’s friends, Pam and Derrick, excited by the prospect of my return and curious about my writing, gathered articles and books, photographs and newspaper cuttings about the war for me. One day, a package with a half-dozen photographs of an old bomb shelter that the previous tenants had constructed in their house’s back garden during the war arrived. Along with the photos, Derrick had painstakingly sketched two drawings of the shelter’s interior in pencil.

If you are interested, Pam had written, there is a virtual Blitz experience at the Imperial War Museum in London. And now, without warning, the simulated air raid siren of the Blitz experience Pam referenced in her letter shrieks. Exaggerated voices of a fictitious family penetrate the whining signal warning of imminent bombs. The mother’s voice’s veracity reminds me of a character on the television program, Eastenders – sharp, nasal, and perpetually angst-ridden. 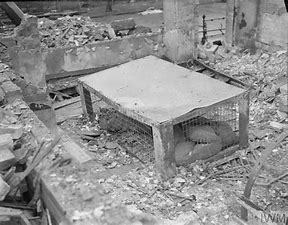 Dishes clatter. Ration cans tip over and roll across the floor. The mother argues with the children’s grandmother. An unseen baby howls inconsolably. The siren’s wail climbs steadily, drowning the conversation. The thin walls start to shake.

During the war, my mother slept in a steel-plated Morrison bomb shelter like this museum reproduction in her family house’s front hall. At night, during the air raid warnings, my grandmother carried my sleeping mother down the stairs to the prefabricated shelter. Knowing nothing of bombs and war, my mother slept gently tucked inside metal walls. Pushed against the wooden staircase, the wire mesh sides and the roof, a plate made of heavy steel, ideally shielded anyone inside from caving beams and bricks if the house sustained a direct hit. Inside, a steel-enforced mattress accommodated two adults and two children. The front side slid vertically, and when the air raid siren bellowed, my mother and her family climbed inside to wait for the All Clear siren to howl.

Though it was cramped and overheated, the shelter was stocked with food, handbags, ration coupons, gas masks, a flashlight, and books. In the daylight, like Pam and Derrick’s predilection for disguise, my grandmother covered the wire mesh with a tablecloth and planted a vase of roses in its center. The pressure of this life lived through never registered in my young mind as a child. However, I tried to imagine what being inside a shelter must have been like, listening to the planes swooping over the rooftops, the rapid-fire of artillery, and the piercing sound of warning sirens.

Prepared for the first ‘bomb,’ I wait to step back into my mother’s life. The walls of the museum shelter tremble like a Disneyland ride. I am as yet, unconvinced by the simulation. The Eastenders’ voices ring hollow. The muffled outbursts climb in intensity until the war outside unleashes torrents of earsplitting blasts. Parents beside me quiet their children and whisper, “It’s not real, love.” After a particularly potent explosion, I lurch forward, convinced the shelter walls would implode, leaving all of us exposed. Even the Eastender characters have grown quiet. I cannot see my hands gripping the edge of the seat, but I know my knuckles are white.

The line between history and the present evaporates.

My mind races. How will the coupons last the month? Will this shelter be enough to keep my family safe? I know the questions I ask myself are manufactured, yet I will focus on the answers. Is this how legacy is transferred from parent to child? Gradually, the bomber planes dissipate, the time around explosions lengthens, and the shelter walls stiffen.

When I emerge into the bright lights of the museum, I am shaking.

When eyes of war meet
Scroll to top