Only one photograph of my father and his sister together survived my father’s war. Olga sits with her legs curled beneath her like the English women in my mother’s photographs. She has a lovely, tiny dimple on her right cheek. The soft shadows of late afternoon cross her face and chest. She leans back against my father, reclining in a field of wildflowers beside a still river. Brother and sister look too contented for the photograph to have been taken during the war; it must have been taken some time during the early 1930s.

My father looks like a film star. A freshly pressed hat with a broad, curved brim like Humphrey Bogart wore conceals part of his young and handsome face. He does not smile but looks quite satisfied. My father and aunt are not alone, though. A man stands along the river banks with one hand on his hip, the other leaning on a walking stick in the deep background. He is wearing a hat, his face entirely obscured by the grainy image. 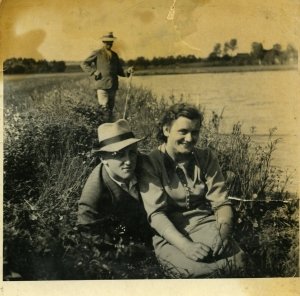 Is this their brother, my dead uncle, or is this my selfish desire to believe?

The Ukrainian uncle I never knew was older than my father. This is the only physical detail about my uncle I know. I do not remember ever hearing my father refer to his brother by name as if the uttered syllables might burn his mouth. No photos of my uncle survived my father’s treacherous journey of survival through war-torn Europe. When I lay out my father’s family photographs, my uncle should have a blank space. He has always been a family myth.

If I could print my uncle’s image from a negative, he would be taller than my father with thin, chapped lips, tanned skin, and a lean and muscular build. He would have earnest, unrelenting eyes the color of fossilized amber, shaded by a sloping forehead with a wisp of sandy hair falling on his brow. If only the curve of his Slavic cheekbones were visible, one would presume the photograph is of a girl on the precipice of womanhood.

In my ethereal image, my uncle pulls his shoulders back, one hand in the pocket of his wool trousers. Suspenders with large, round buttons curve over his collarbones and cross his back—streaks of mud cake on his once-white shirt. The dampness of his sweat draws the material closer to his chest and arms. His rolled-up sleeves reach to his elbows. His boots, dulled by the earth and labor, are his favorite pair. Evidence of a careful repair on the left boot, a patch of leather taken from a new saddlebag, form a circle the size of his watch face.

My uncle holds a cigarette in his right hand, and his pouch of tobacco bulges from his shirt pocket. He stands beside the family’s team of workhorses, and the rusting plow he steers by hand is behind him. Though worn by sun and wind, the bridles are polished; the leather is a rich, dark chestnut. The bits glisten in the anemic sunlight. The sky sags, heavy with rain for the first time in days. The collars of the harness rest limply around the team’s thick necks. The edge of the plow’s scythe lies hidden underneath clods of parched earth.

My uncle looks directly into the camera. He does not smile, but his face is calm. His eyes look as if his mind wanders. Perhaps he is thinking about the field that he must finish plowing before the storms arrive. The earth is more brutal to turn over when it is parched and stale. Though he is only in his mid-thirties, worry lines cross his forehead like parallel railroad tracks. Around his mouth, a dimple in the shape of a horseshoe curve toward the square chin he inherited from his grandfather. Maybe my uncle knows that the German soldiers will find him.

If I turned on the light in the darkroom, the image would be so sharp it would hurt my eyes. The blacks would be dense and impenetrable, the whites crisp like fresh linen. There would be so many gray shades that it would take me days to count the tones in the pebbles and dirt alone. Each strand of loose hay, each wrinkle in his leather boots, each particle of perspiration above his sparse lips, is so animate, I am afraid that the man in my ghostly photograph stands next to me, my uncle’s sweet tobacco breath grazing the nape of my neck.

Looking closely at his face, I see the early growth of the next morning’s beard between the lines of his mouth. His translucent eyes are the color of the stone found along the Sea of Azov. I trace his knuckles, scratched and torn from the plow, and follow the lines of his cheekbones curving like the wings of a butterfly. I spy where his mother or his sister mended his trousers along the inside seam. I see my uncle, married to the land for which he would give his life, the tension of his soul, his struggle between hope and fear, joy and sorrow, darkness and light, before the image I will never hold vanishes before my eyes.

He is an omission. 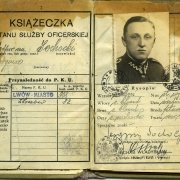 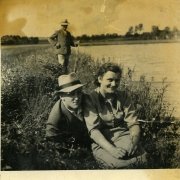 I have much to tell you 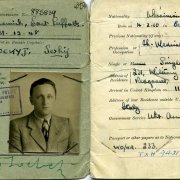 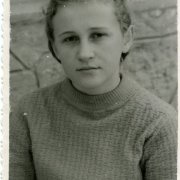 A riddle I could never solve
Scroll to top